I've got a bit of a tradition of doing some sort of hike after Thanksgiving.  This year, I subverted that slightly by tackling the lengthy Mortero Palms and the Goat Canyon Trestle hike the week prior. However, Annika wasn't able to join me on that adventure, and has chomping at the bit to get out and do some hiking of her own, so we took a day during her school break to attempt to revisit one of my old favorites: Juaquapin Trail up to Dyer Springs. 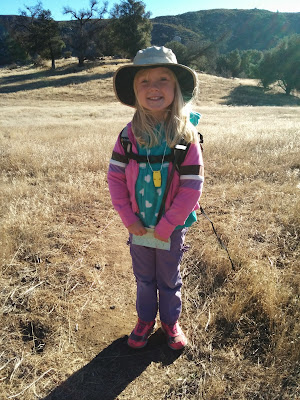 Read more »
Posted by Choose_Adventure at 3:12 PM No comments:

In late October, members of the American Adventurist forum started organizing a long and strenuous pre-Thanksgiving hike up to Mortero Palm Canyon and to see the Goat Canyon Trestle.  Seeing the trestle has been on my long-term bucket list for great hikes around San Diego, so I simply had to join them. 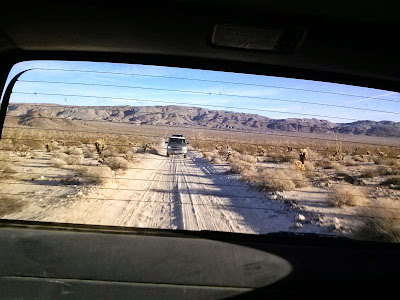 Read more »
Posted by Choose_Adventure at 9:33 AM No comments:

Some dedicated readers may remember that when I originally transplanted the GTRV top from the donor van, I noticed that one of the pop-top hinges was slightly bent and thus was binding. I've lived with this for 3+ (holy crap, just checked dates: actually FIVE) years, but the net effect was that the top never quite seated correctly on the van roof. I had trouble getting enough tension on one of the forward latches and sometimes after dropping the top I'd have to climb onto the back bumper and manually pull down on the top to get it fully closed. Early calls to GTRV for replacement hinges went unanswered. I eventually figured out (through a lot of catalog searching) that the hinges were Reimo-made, duplicates of early VW Westfalia hinges. Sourcing these directly from Germany was going to be VERY expensive, so I kept looking for alternatives. Eventually I found other hinges with a similar (but not exactly matching) geometry for another product. After some wheedling, the manufacturer of those bartered with me for a set: 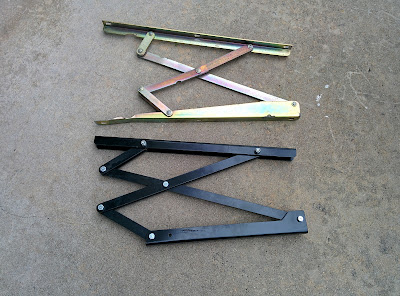 As you can see, the gold Reimo hinges are longer, so I had to make some modifications to get things to bolt up. I don't have pictures of the process because it was a bit sketchy with the top raised and supported by 2x4s, etc.As a bonus, the replacements are vastly superior construction. The Reimo design is thin material and single-shear, whereas the new ones are thicker material AND double-shear: 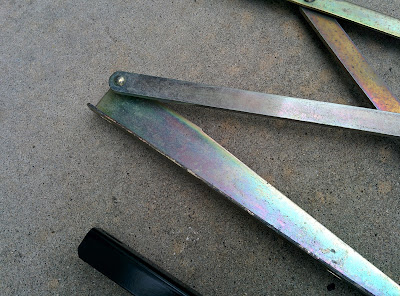 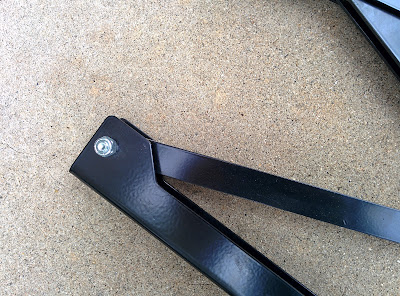 For some reason, I never took a photo of the top raised with the new hinges. It looks basically the same. :DKnowing that the hinge-replacement was always on the horizon, and fearing I'd need access to the roof to change the hinges, I never got around to putting the headliner back in the van. I'm sometimes amazed that my wife didn't complain more about riding around in a van with the metal roof and all the ribbing exposed. With the hinges finally changed, I was able to start that job only five years later.Step one was to put the headliner "mostly" up, and make a small access hole: 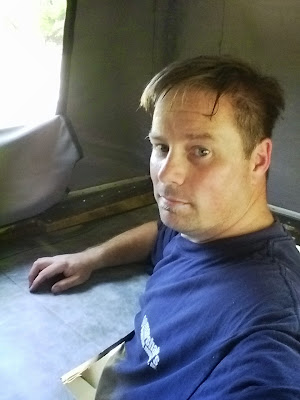 Reminds me of the early stages of this project, 5 years and 50+ lbs ago: 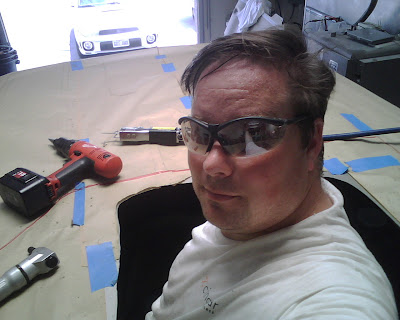 Anyhow, using the access hole, I marked the perimeter of the headliner against the hole in the roof: 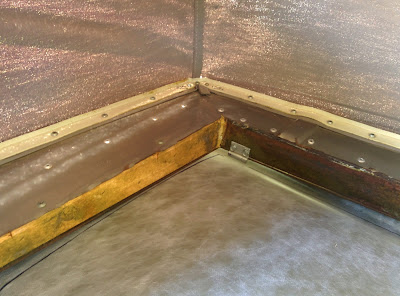 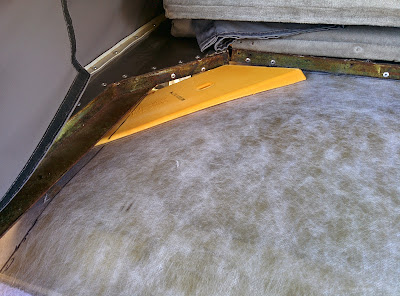 Then started in on it with a razor knife: 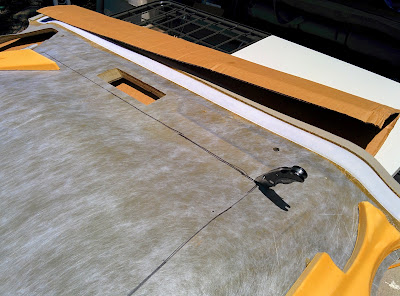 And finally ended up with a big hole: 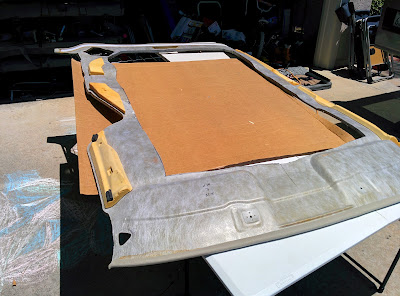 (Note, this is actually about 2/3 of the headliner - the Astro design has it in two pieces, the rearmost 1/3 is a separate piece and re-installed mostly without modification)
Given how thin the "side strips" are, and due to issues with needing to fit around the reinforcing ring at the forward edge, I decided to divide the headliner into two pieces. I needed to make a new forward section from scratch. The "middle" and rear headliners are now currently installed, but the cut edges still show.  I didn't like how the old GTRV headliner was installed as one giant piece with the fabric from the headliner wrapped directly onto the upper roof and was glued down. This made it so you couldn't drop the headliner without peeling the glue, so I'm making sure I "fix" that method before I recover everything here. 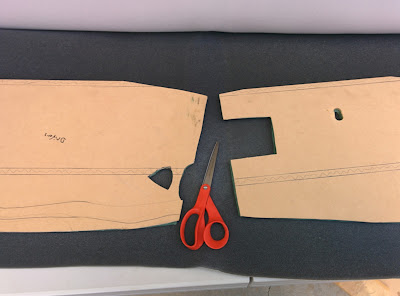 I've finished crafting the new forward headliner sections.  Templates were made from some scrap hardboard.  Lots of little odd cut-outs were needed to deal with the mounting for the visors and forward dome lamp. 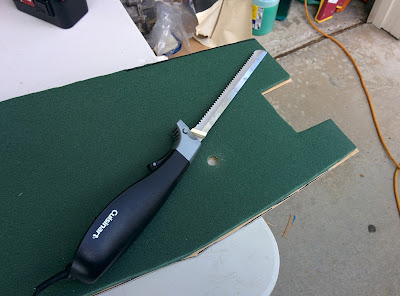 A high-density closed-cell foam was glued to the hardboard - I'm always wary of knocking a head on this area in an accident. 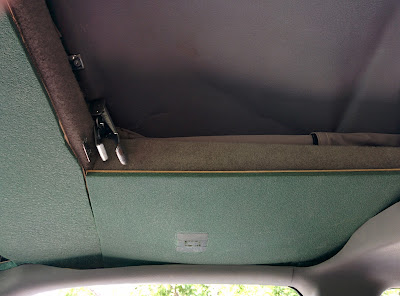 Test-fitting the headliner panels. As you can see, the upper-bunk carpet is now separate from the headliner, so I can drop the headliner when ever needed for maintenance (or to run wiring, etc.)  These panels are partially held in by the OEM plastic trim, but after they were covered in matching headliner fabric, I've also added a few screws and finish-washers to hold them in place.  I just realized I don't have a good photo of the finished panels!

Posted by Choose_Adventure at 8:25 AM No comments:

Despite the fact that we've enjoyed various Desert Rendezvous events since 2011, this year marked the first time we'd been able to attend the companion Mountain Rendezvous, put on by the excellent team from American Adventurist.  As always, the Rendezvous are a wonderful time to make new friends, see some cool rigs, and eat awesome food. 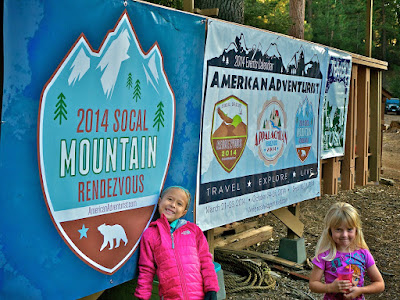 Read more »
Posted by Choose_Adventure at 12:32 PM No comments:

It's become a bit of a tradition to try to spend a week of our summer at South Carlsbad State Beach.  For the second year in a row, we elected to spring for a delivered trailer, rather than "roughing it" in the van.  It adds some cost, but it's less than the price of the hotel rooms on the other side of the main road, and we've got a better view of the beach!

Read more »
Posted by Choose_Adventure at 8:30 AM No comments:

I wanted to share some of the highlights of a recent weekend trip. I was inspired by a the concept of the 36 Hour Adventure. I really resonated with the notion that we can miss lots of great short trips if we focus too much on the long expedition-style trips. Too often lately I'd been burning weekends reworking the sleeping arrangement in my van, or building a chuckbox.

Instead of waiting until we could manage an Epic adventure, we set out to see how much we could pack in to a weekend. Well, I think we did ok. In our 36 hours, here's just some of what we were able to accomplish:

Read more »
Posted by Choose_Adventure at 2:27 PM No comments:

A pair of annual Rendezvous events, one Desert, one Mountain, are fast becoming must-do events if you live in the SoCal area and enjoy overlanding, camping, adventure, good people, and/or good food.  This year's desert event was no different.  I was sad to be attending solo, since Annika's soccer season was in full swing during this event, but by the end of the trip, I think the rest of the family was glad they hadn't joined me! 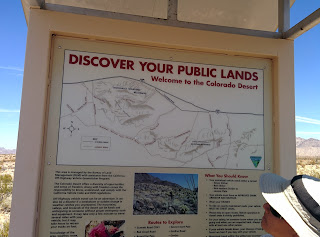 Read more »
Posted by Choose_Adventure at 1:13 PM No comments: