This summer, I finally figured out the crazy reservation scheme employed by the California State Parks, and was able to score a couple of different weekends at the coveted South Carlsbad State Beach campground.  On our final beach campout of the summer, we were joined by some friends of Annika's.  Some may remember when Annika met her instant best-friend Joe at the SoCal Desert Rendezvous last March (written up on Dad's blog because it was more about camping).

At any rate, Annika has been asking about when she could "go camping with Joe" pretty much weekly since that trip.  We were finally able to oblige.  As a bonus, Joe brought his kid-sister along (and his Parents made an appearance, too). 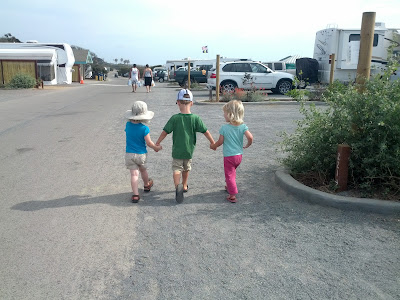 Read more »
Posted by Choose_Adventure at 2:32 PM No comments: