Well, just in time for the American Adventurist SoCal Mountain Rendezvous, the Rock-N-Roll bed is "done".  Or at least, "done enough to sleep on".

It took a bit of a push, especially given the near record-setting heat and humidity we suffered through for the Labor Day weekend, but we're at a point where we can sleep on the new bed system.  Between that and a few other odd jobs, we're good to go for camping next weekend! 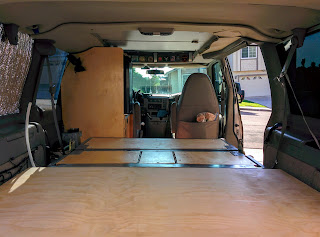 More after the jump...

The main work was sorting out a new rear extension platform which takes the place of the rear engine deck-lid in the VW vans.  I used a similar platform with our original "conversion van" bed, but the dimensions changed just enough that a new unit was needed.  As I mentioned in the last post, the platform rests on the same adjustable crossbar that the seat-back folds onto, this ensures that the two platforms mesh evenly, with no transition "hump".  You can also see a couple of metal plates in the picture below - these limit the platform from moving forward.  Since the platform is "floating" (so as to be easily removable), it could technically be pushed forward where it would interfere with the seat reclining - these straps keep it perfectly positioned so that the seat drops down flush.

You can also see that the seatbelts have been re-installed, the water tank has been re-plumbed, and I finally undertook the simple task of marking the sight-gauge for 3/4 and 1/2 full.  More about that long aluminum tube at the bottom... 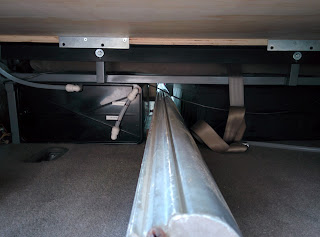 The other necessary change to finish the bed project was to get an even mattress.  As I've mentioned previously, the old conversion-van seat had two different foam densities, plus the seat-bottom section was sprung, while the back was rigid, this meant that each of the three parts of the bed had a different "sink".  Now that the bed platform is perfectly flat, I've also topped it off with a single foam mattress, cut into three sections.  This is another budget solution, an Ikea Lycksele Lövås futon mattress.  This was pretty close to the right size, so there wasn't too much waste.  One surprise, not advertised on the site, is that the mattress is "divided" into a long and a short section (presumably to fit their futon frame).  Fortunately, the split was in a place convenient spot.  At the moment, the cushions are just (somewhat loosely) wearing the recycled covers from the conversion-van seat, but new zippered covers are next on the list. 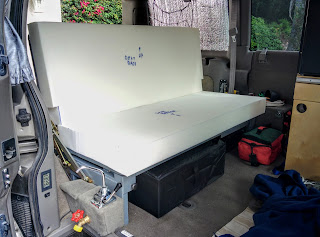 Reason #426 why I love my van (and why I built the bed base to be open back-to-front):
I can easily transport 8-foot plus long stuff inside the van.  In this case, I've got the old awning from our donor van. We used this happily for about six years before swapping out for an ARB unit that included a mosquito room. I had time to complete a couple of other minor projects that don't merit their own post, but are worth preserving.  First was to whip up a couple of adjustable straps and to drill the bed platform so that I can safely sit the chuckbox on the rear bumper.  The slim and slightly angled nature of the bumper means just resting the box here can be a little precarious.  I bent up a couple of hooks so that the box is held back and won't tip off the end of the bumper.  I won't typically use it this way, but occasionally I just need quick access and don't want to setup a stand or move the box to a table.  At least now I have the possibility of prepping a quick meal off the "tailgate" of the van. 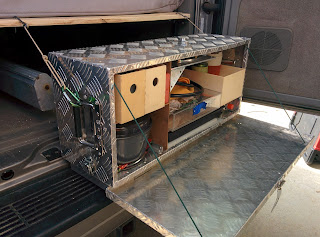 Just a quick detail from a project that will be covered in more detail in an upcoming post:
What do you do if your "precision" stainless steel fender washer fits the threaded portion of a bolt, but not the un-threaded shank portion?  Enlarging holes in thin material is always tricky, and damn near impossible on something round that you can't easily clamp.  Even on the slowest setting of my drill press, I could never drill this somewhat hard stainless without the bit catching and whipping the washer out of whatever clamping system I could devise.  This is the right way to do it, especially if you only need to enlarge the hole a smidge:   Using a table clamp and a long-jaw C-clamp, the washer is pinned at the corner of a slot in my welding table.  Then, I use a tapered hand reamer to slowly remove material until the washer fits the shank of my bolt.  Zero-percent chance of snagged washers and a perfectly round hole*. 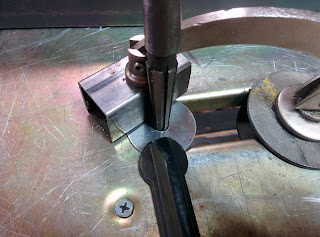 Posted by Choose_Adventure at 10:02 AM