Some questions on solar systems have been coming up on the GTRV owner's forum lately, and while I've been popping in with options and opinions, I haven't had a firm write-up I could point people to.  Time to remedy that by detailing some of the important bits of the Astrolander's solar installation. 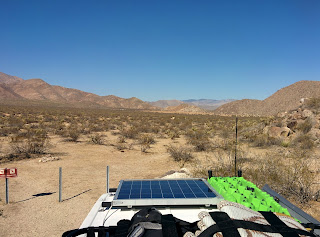 First, the specs, since I know some people are all about the parts and numbers:
This system has been through a couple of iterations, but I'll try to describe it in its current form.

The portion of this installation that seems to be of interest to most folks is the locking "rack" that houses the solar panel on the roof. 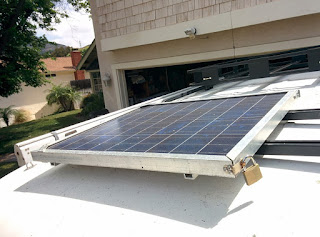 This rack is made from four lengths of 1.5" x 1" x 1/8" C-channel aluminum, cut with mitered corners to fit the dimensions of my solar panel.  The  SolarCynergy panel is advertised as 1.38" thick, but that's the "maximum" dimension where the electrical connection box on the back is proud of the rest of the panel.  The actual aluminum frame is just under 1.25" and slides very nicely inside of the "C" of this channel material. 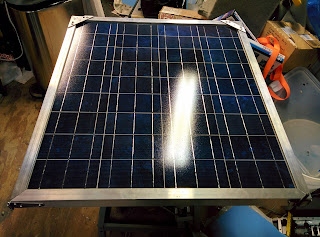 I cut the miters on my normal wood miter saw because my metal-cutting bandsaw was down at the time (proof you don't need fancy woodworking tools), but it's so soft even a hacksaw and a miter-box would have done the job.  The rack is made with three sides fixed (two long, one short).  I can't weld aluminum at home, so I attached the corners with "straps" made from 1" x 1/8" aluminum stock (top of image, above). 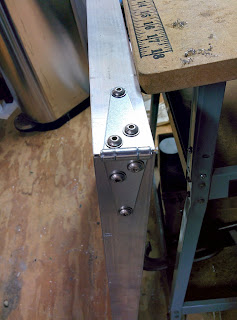 At the open end, the last "short" edge is attached with a single hinge and locked with a standard padlock hasp.  All of these connections were made by drilling and tapping the C-channel for 10-32 screws.  I didn't want to interfere with the panel sliding in/out of the "C", so you can see that I had to add a single thin washer with my stainless button-head cap screws to make sure the threads didn't protrude through to the inside. (Hint: Always use anti-seize paste with stainless fasteners) 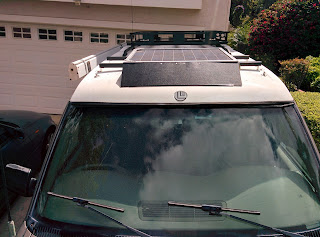 I also drilled and tapped the frame for a piano hinge so I could add an ABS plastic fairing.  With the panel mounted this far forward on the roof, a lot of wind was getting under the panel and making some noise.  This solved the problem easily. 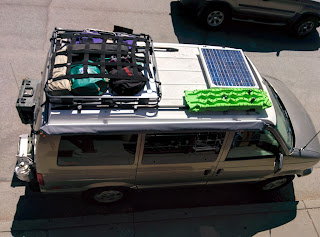 The cross bars that I use here have "T-slots", so it was also easy to reposition the panel off to one side to make room for my TRED traction mats, seen hastily mounted here before a quick trip to the San Bernardino National Forest. 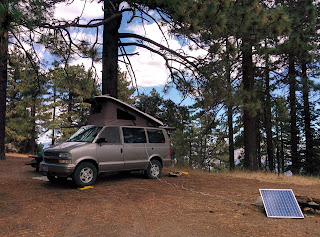 I use jacketed 12AWG Outdoor-rated speaker cable for the power leads.  One cable runs from the solar controller up through a cable gland in the pop-top and up to the rack. The real advantage, though, is that when I want to park in a shaded area, I can unlock the rack and slide out the panel to place it someplace with better sun.  A second 20' cable (that I currently just feed in through the mid-window) lets me move the panel around to wherever works best.  The panel is easily removed while standing in the driver's side "foot well" and the 60w panel is light enough to be easily lifted and maneuvered.  Shorter owners, or those without as much upper-body strength, might need a ladder for a larger 80w or 100w panel, though.

The rest of the system is fairly conventional for the RV/overlanding crowd:  I have a 1st generation Morningstar SunSaver 6 PWM solar charge controller that takes the input from the solar panel and feeds out to one of the fused lines of my BlueSea fuse block.  This connects to my deep-cycle AGM marine battery.  That battery, made by Odyssey, works best with really high bulk-charging current, so I've added an Iota DLS-55/IQ4 to hit it with up to 55 amps when I'm connected to shore-power.  Since the 1st generation SS-6 doesn't have much in the way of monitoring or indicators, I've added an inexpensive panel voltmeter to the interior so I can monitor the state of charge, etc.

The battery is also still charged by the alternator when underway, courtesy of the T-Max charging relay system I installed way back in 2011.  As an update to that post, the original solenoid failed after about 2 years and was replaced with a Cole Hersee 200A continuous duty model (p/n 24213).  The nice thing about this system is that the T-Max works in both directions - if it senses that the house battery is getting charging voltage, it closes the solenoid - which means that the solar system and the shore-power charger also maintain the starting battery.  This latter benefit is actually the real reason I keep this system in-place, as it turns out with our typical usage (driving no more than ~2-3hrs/day, often much less), the alternator just doesn't put out enough current to adequately charge our house battery, especially when it's well-discharged.

On the subject of "How much solar do I need?", I'll offer this: You need "enough", but really don't want "too much". Sufficiently vague?  To put it less tritely, you need enough wattage to cover your normal use, under normal conditions, but there's little benefit to over-building your system since it just costs you money, size, weight, and probably fuel-efficiency if you're talking about roof-mounted.
Our little 60w system is enough to keep our fridge running, our LED interior and exterior lights lit, and our phones and tablets charged.  Our fridge averages ~36AH/day, which would be enough to drain the 100AH battery to the nominal 50% cut-off point in less than two days, but with good sun we can put back 30-40AH per day (60w/12v = 5A nominal output, multiplied by 8-ish hours of good sun/day).  As you see, that puts us just about "even".  There are a million little factors that affect this number - cloud cover, battery and panel efficiency as a function of temperature, charge controller efficiency as a function of design (PWM vs. MPPT), etc., but our empirical experience bears out that the 60w panel is just about enough for us to maintain indefinitely.  Obviously, adding a bigger fridge, a furnace, fan, or other major power consumer is going to tip that balance over.  You'll need to figure out your own load requirements when trying to size your own system.  Using the published specs of all the power consumers is a good first-order approximation, but after that you may need to start taking measurements.

Posted by Choose_Adventure at 10:30 AM