"Simplify, and add lightness" - Colin Chapman
It's not just for race car engineers, it's good for overlanders too.

Like a lot of folks in this hobby, I've expended a fair amount of time and energy on figuring out cool ways to bolt useful things to our rig. The irony is not lost on me, therefore, that much of my latest work on the van involve either setting aside previous projects, or undoing them altogether.

Prior to our 2016 California Coast roadtrip, our first excursion as a family longer than a weekend, I had undertaken adding a second load-carrying rack to the passenger-side dutch door, and adding a Pelican iM2720 case to the driver-side rack. This was at least partially motivated by the need to free up a little more interior storage space.  The revamped left-side rack also saw the addition of a step which made accessing the roof basket infinitely easier and safer. 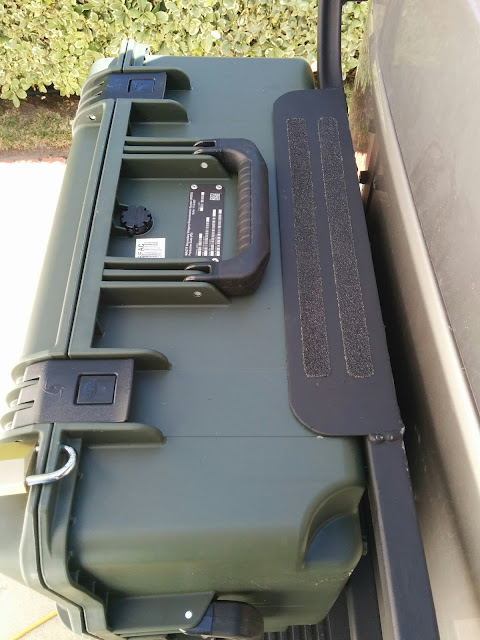 The job of refinement is constant, though. This means continually improving access to our gear so as to eliminate daily hassles. It also means the process of slashing weight off the van continues.  By going through a bunch of small steps, I have been slowly eliminating, or finding new homes for, many of the items that I'd been keeping in that Pelican case - and it's finally time to remove it entirely. 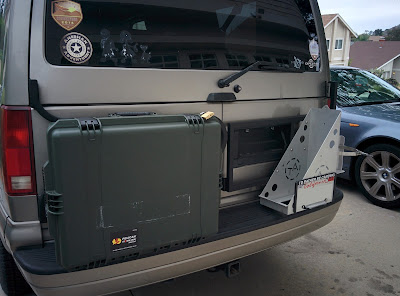 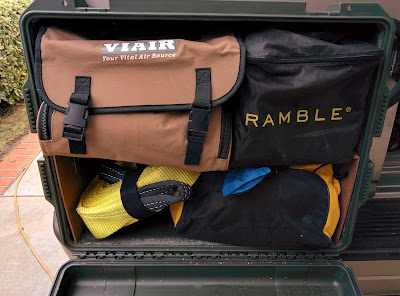 My Trasharoo then usually went over the top of that: 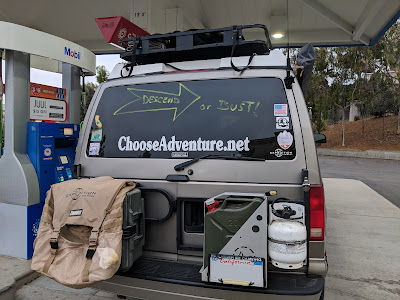 The net result was that between the trash bag and the requisite padlock, it was a serious pain the arse to access anything inside the box! Plus, the Pelican case weighed almost 17 pounds empty. 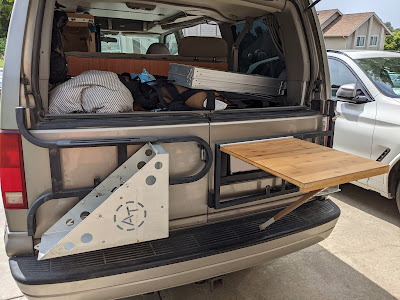 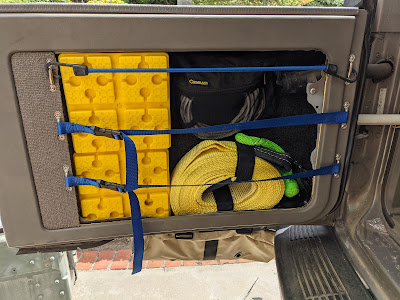 This is the summation of a number of tiny projects:

Technically, I didn't need to relocate the jerry-can carrier back to the driver's side (where it had started many years ago), but having it on that side makes it a little easier to transfer the fuel, and it balances the rear door loads. It also provides just enough of a spacer to keep the trash bag from just sitting on the bumper.  Mounting the can sideways was a concession to keeping the step on the top of the rack - I use it every time I go to the roof basket!

On the passenger side, relocating the small bit of table-mounting rail onto the upper rack improves on an idea I've been experimenting with to use the interior table as an outside cook surface.  Previously, it had been mounted low enough for the folding leg to touch the ground, but this limited me to a very low surface - bracing the leg on the bumper puts things at a much more usable height!

All told, this set of mini-projects let me strip another ~30lbs off the van and eliminated several more "pain points" where getting things in and out was a hassle.  This also sets up future weight-loss; I'm going to try out the rear-mounted table on my next couple of trips - if that works well, I hope to be able to eliminate the portable camp kitchen table from the kit.

Update 2021-08-15: I'm really invested in being able to re-use the same table that we use inside the van - mostly because that mass is already factored into the budget - getting another use out of it will be great.  That said, being able to wedge the adjustable leg onto the bumper was fine, but I couldn't access the rear of the van while the table was in-use. With the addition of a small drop-bracket, welded from some scrap-bin C-channel, I have improved the utility significantly: 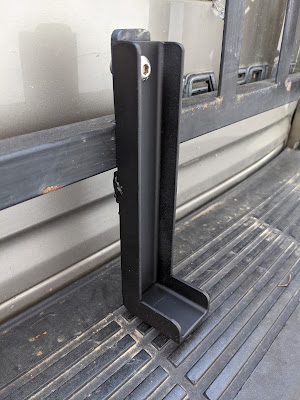 This little bracket fixes to one of the mounting tabs leftover from the previous utilization of this rack.  There's a little alignment tab on the back-side that keeps the bracket square to the rack, even though it's only affixed via one bolt. 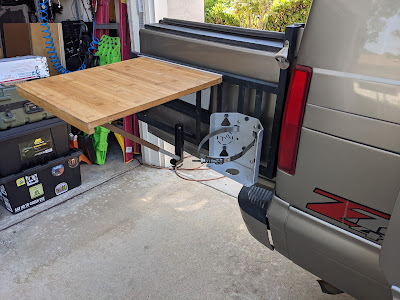 Now, I can open the rear door while the table is deployed.  This position is also very convenient, relative to the awning - I can stand out of the sun, without worrying about the heat from a camp-stove rising straight up into the canvas.  The final step will be to reorganize my kitchen kit one last time, then out comes the kitchen prep table.
Posted by Choose_Adventure at 12:00 PM