Aside from a few COVID-projects to optimize a couple parts of the van, things have been pretty stable/reliable for a while.  After a particularly hard push at the day job, I took advantage of a free day to take a solo overnighter up to one of my favorite areas in the San Bernardino National Forest.  Access is via a pretty good FS road, but there are a few spots where the graded dirt gives way to a vein of rock poking through the terrain. 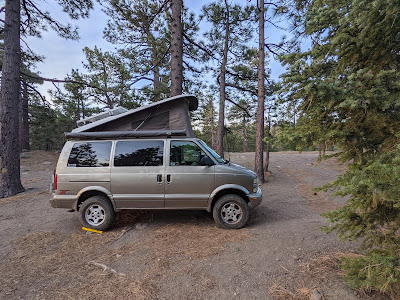 Coming down after a great night of photography and relaxation, I was feeling pretty good - and maybe not crawling quite as slowly as I should have been.  Dropping the rear end off of the "step" formed by one of these rock veins, I heard a pretty significant clunk from behind me.  Upon inspection, I found that I'd sheared the shaft of one of the rear shocks: 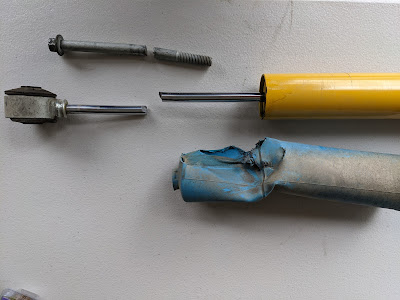 Once freed from the upper mount, the shock flopped over to rub against the muffler - hence the melted boot.  I also severely bent the upper mounting bolt (single shear), such that it had to be cut out in order to replace it.

After a little time spent taking measurements and thinking about the failure mode, it became pretty clear that what likely happened was that I over-compressed the rear suspension without appropriate bump-protection, and something had to give.  I'm honestly surprised it hadn't happened sooner - the rear of my van is VERY heavy (right at or just over the 3100lbs GAWR), and the S-10 springs (1350lbs rated) were over-loaded.  This had led to them sagging over time.  Combined with the relocated shock tabs (which move the lower mount point [I]up, [/I]and OEM bump-stop height, this created a condition where the reduced neutral suspension height was such that with a big compressive moment (such as coming down off a bump with all the weight of the ass-end) could get the ride height shorter than the minimum length of the shock.  I had been noting that the suspension was riding low, so it was entirely stupid that I didn't address this sooner.

Needless to say, more than a replacement shock was in-order.

As I'd already noted the sagging springs, uprated 22-687HD springs (same eye-to-eye and arch, but with an extra leaf, rated to 1750lbs) had already been ordered and were sitting in my garage.  These were fitted, and I also fabbed a set of 3" risers for the OEM bump-stops: 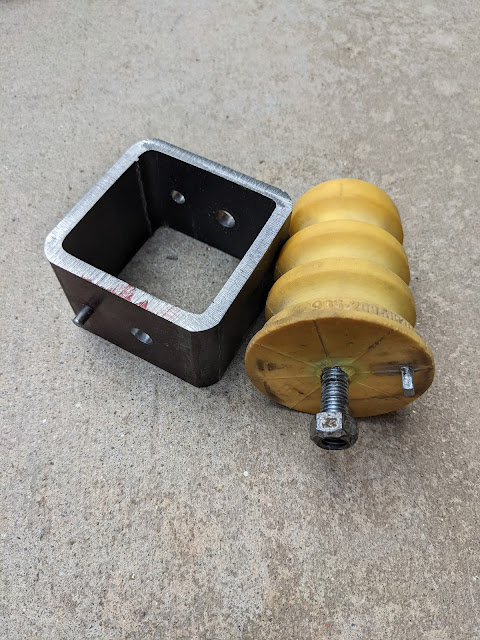 Combined with the more appropriate spring rates, I was now back at my intended lifted-height, but found that GM's OEM clamshell arrangement for fixing the springs to the axle didn't easily accommodate the thicker 4+1 spring pack: 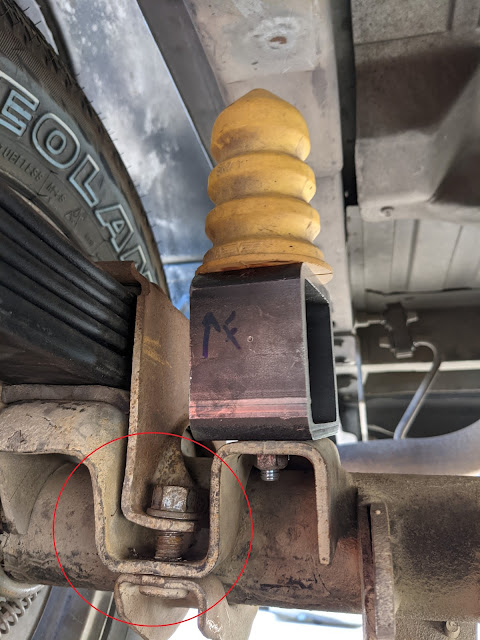 The upper clamshell half is supposed to meet the lower.  While I had sufficient bolt-thread through the nut, the tension there was flexing the 1/8" steel of the upper clamshell in a way that didn't inspire confidence.  Some folks have stacked washers or a spacer into that gap, but I also disliked that the studs coming up from the tube bracket were so short that it was very difficult to get things "started", so I went looking for a better solution.  The tricky thing is that in the original design, the top of the spring pack operates pretty close to the "rail" in the rear body.  Upward-facing U-bolts will potentially interfere with suspension movement.  Instead, I adapted a solution I've seen on other Astros with a thicker spring pack: 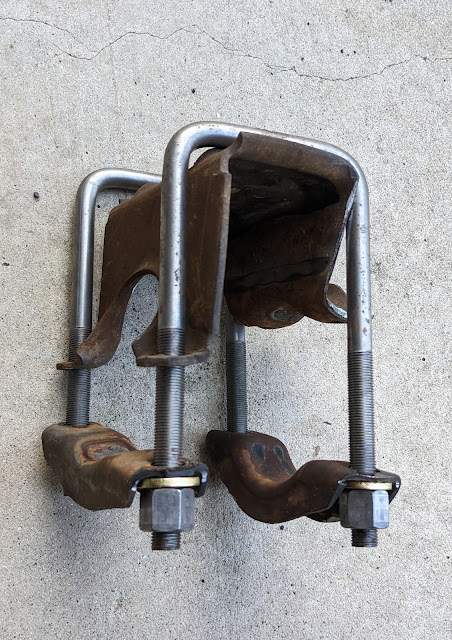 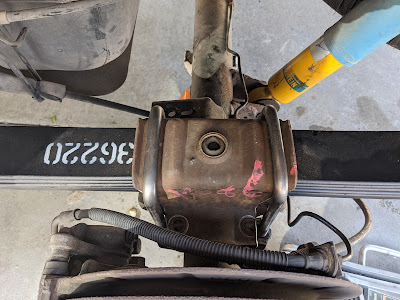 I did not want to modify my original hardware since I wanted to be able to reverse this if it didn't work out, so I started at the junkyard and picked up another pair of upper clamshells and TWO pairs of the lower axle brackets with the studs.  A little time with a cutoff wheel was needed to remove the studs from the tube brackets and to clearance the upper clamshells for the U-bolts: 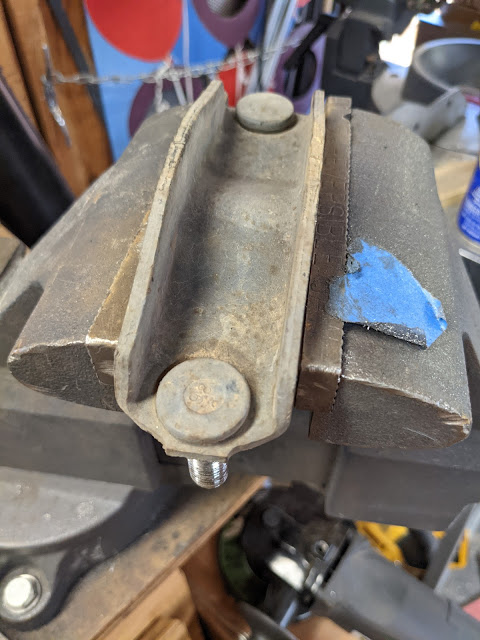 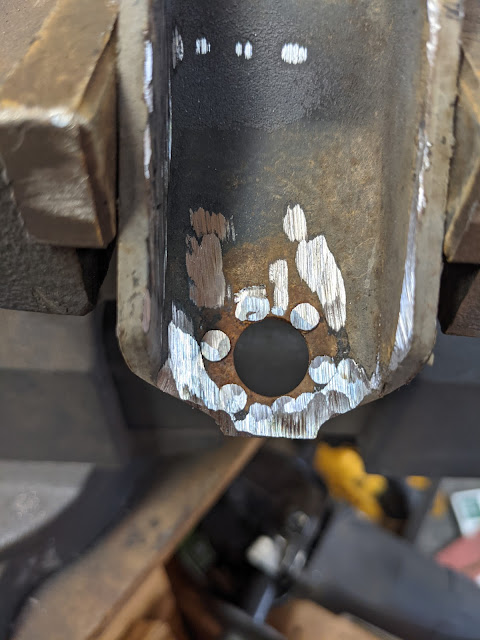 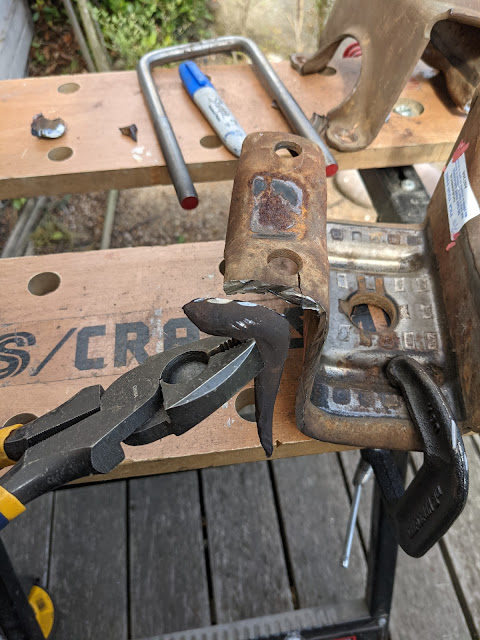 Due to how my weekend schedules worked out, I had done all this prep work on these brackets a few weeks in advance.  When it came time to actually install everything on the van, it was pretty much a bolt-on operation.  Is this what it's like for the Jeep guys who just buy everything off the shelf?  Child's play! 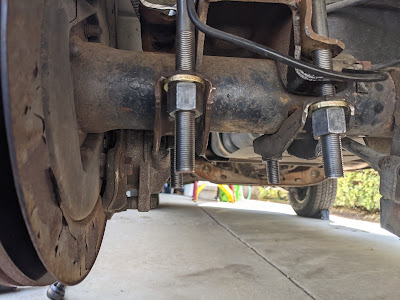 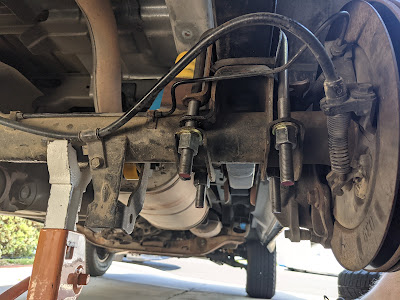 A few quick notes for any other Astro/Safari owners who may follow behind me:

I had one other side-effect from the new HD spring pack: with the same nominal +4 arch as the S-10 springs, but a more appropriate spring rate, I've got slightly deeper arch in the pack, and I got interference between the "rebound clip" and the exhaust pipe after the muffler.  A torch and a couple of burly dudes at my local Midas sorted this out for a coffee-money sized tip: 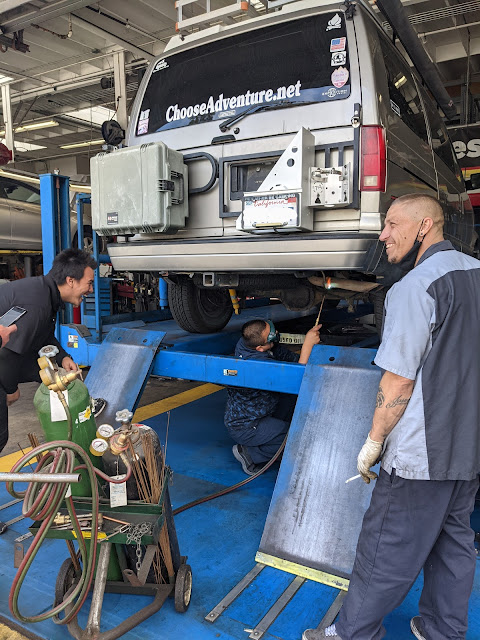 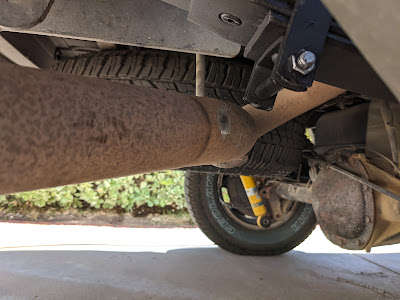 Posted by Choose_Adventure at 11:51 AM