On Board Air, Part 1

So we spend a lot of our time in the van out in the desert.  A lot of those trails have pretty badly washboarded roads, and I know that the best way to smooth those over is to air-down my tires.  Yet sometimes, I don't.  I just grit my teeth and listen to everything rattle.  Why?  Because I dread the hassle of airing back up.  It's not that it takes that long, but the whole process of fetching the portable compressor out of the back box, popping the hood to connect the battery clamps, airing up, and then reversing the process just to try to deal with a too-hot-to-touch compressor does make me think twice before grabbing the deflators.  And that's dumb.

Ergo, time to simplify that as much as possible.  Hard-mounting the compressor and an air tank under the van won't shorten the actual time to re-inflate by very much (though having a bit of reserve in the tank should help a bit).  The biggest motivator here is just to have everything "ready to use" as much as possible.  Connect the coiled hose to an outlet on either side, and start the air. When complete, disconnect and stow the hose, and off I go.

To that end, I did my usual "slow burn" on this project.  I spent a few months gathering datasheets and crawling around the van with a measuring tape.  A few months back, I picked up a hard-mount version of my Viair 400-series compressor from a friend at a swap-meet.  Next I scored a nice air tank off eBay for about half of normal price.  Today's project is to get ready to mount the tank. 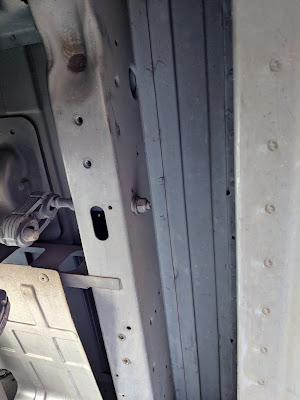 After a lot of lying under the van, I chose this spot - this is the recess under the body behind (inboard) of the entry step.  It's long and skinny, and just about tailor-made for the Viair 2.5gallon tank.  Towards the top-end of the photo you can see two captured nuts in the body "frame rail".  Not sure if these serve a purpose on older or 2WD vans, but on mine they're un-used, so I took them over for my purposes.  I happened to have the right metric thread bolts in my collection of things I've removed from the van over time.  Towards the bottom of the photo (forward end of the frame rail) you can see that I added a pair of riv-nuts for a second bracket.

I used some 2" angle iron for the body-side, and 1.5" angle on the tank-feet, with 1" square tube connecting them.  You can see from how the mount sits on the tank that just about half of the tank will fit up inside that space.  If I could have found a 5" diameter tank, I think the entire thing would have fit into that recess. 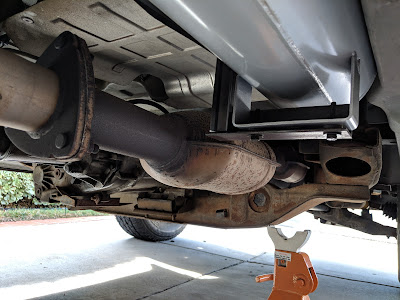 Here's a low-angle shot of the brackets test-fit. 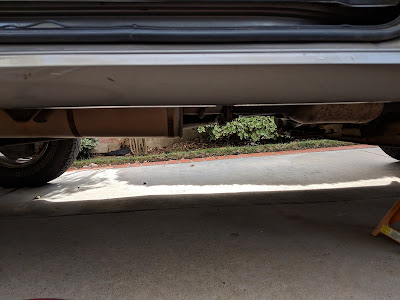 And here's a shot level with the bottom of the van body.  Can you see it?  Nope, it all tucks up into that space really nicely, so very little risk of damage there.

Can I also just say: What a delight working under a lifted van!  So easy to just slide under there for test-fittings and installation.  No jacks, no ramps, just a single jack-stand to help hold the tank while I do up the bolts. 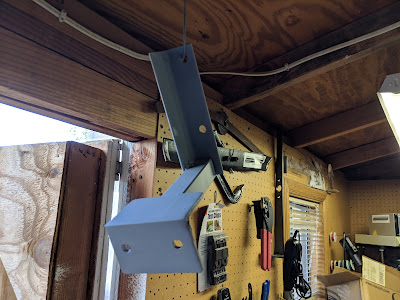 Brackets finished welded and primed.  I'll finish the paint this week, and I hope to be able to get the tank and compressor mounted sometime after Thanksgiving (though I hope to head out to do some hiking on Black Friday).  It's looking like the compressor will get mounted in the rear near the spare-tire mount, there's an out-of-the-way spot up there.

Stay tuned for more!
Posted by Choose_Adventure at 3:33 PM