Back in 2016, just before our California Coast Roadtrip, I had finally got round to finishing the installation of curtains in the van.  For curtain tie-backs, I used some 1" Nylon webbing I'd found in a matching color. 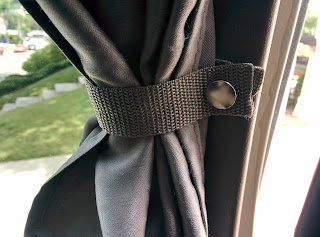 These were easy to make and matched the silver/grey curtains - but as you can see, just two years later, things aren't looking so great. 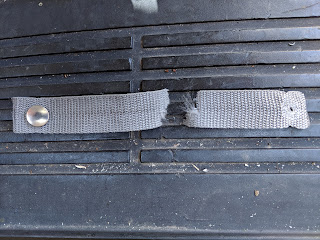 This was webbing bought at a fabric store, rather than from, say, an outdoor retailer, but I was still surprised at how brittle this got in such a short period of time.  The two tie-backs that were in the rear "dutch" door were the first to fail - probably because they get the most sunlight, despite the heavy factory window-tint - but the other curtain ties were also getting brittle.  It was also time to correct a minor flaw in the way I'd made the first set - with very little "tab" next to the snap, it was sometimes hard to get these "un-snapped". 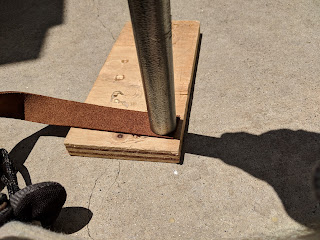 I started with an 84" roll of 1" oil-tanned leather strip.  This material is only 5-6oz (which correlates to its approximate thickness, ~2-2.4mm), so thin enough to be supple but should still be more than strong enough for this application. A typical leather belt is more likely in the 8-9oz range (~3.2-3.6mm thick), which should help you get a feel for this material. 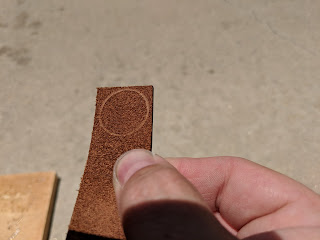 First step was to mark one end for trimming.  I just pressed a convenient bit of conduit into the backside of the leather to mark a curve, then trimmed with scissors.  Better equipped leather workers most likely would use a specialized punch to cut the end very precisely. 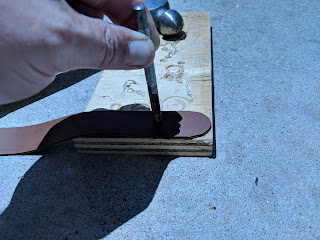 The next step was to use a small punch to make a hole for the snap.  A rotary punch would also work well here, but this is what I've got.  (Apologies for the color tint, I was shooting in very bright sunlight which occasionally confused my phone's camera.) 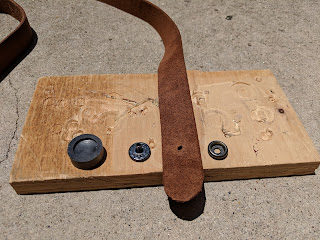 Once the snap hole was punched, you just stack everything up.  The order, left-to-right, goes bottom to top: The anvil for the snap setting kit, the "face" of the snap with a stud that goes through the belt, then the business end of the snap. 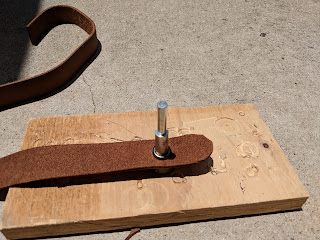 Stacking all these up, then finally you use the setting tool and a hammer, which peens-over the post of the snap to bind the snap pieces all together around the belt. 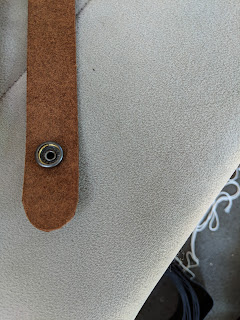 The "finished" end of the tie-back is now complete. 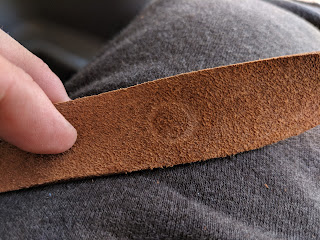 Marking the other end for length is very simple - I just hold the strap in-place with the curtain and press the finished snap against the leather.  This gives me just enough mark to know where to cut the strap for length, and where to punch the hole for the "male" part of the snap. 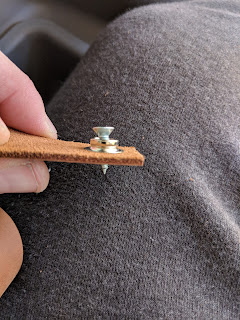 Another hole is punched in the same way as for the female/face of the snap, and we're ready to screw it down.  I will note that while it seems that there are a slightly different "type" of male snap to be used with screws, rather than to be riveted to material in the same way as the female portion, I've been able to use "riveted" snaps as "screw-down" snaps by just picking the correct screw that recesses far enough down into the snap that it doesn't interfere. 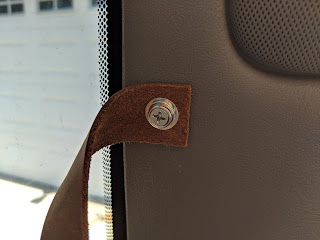 The tie-back is then attached to the appropriate surface.  In this case, I went into the same holes I'd created when I first installed the nylon tie-backs.  These are just screwed directly into the van's trim plastic, with the "finished" side of the leather face-down. 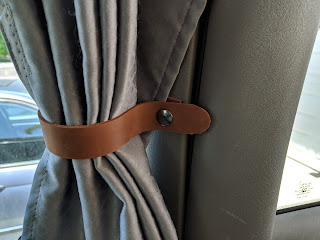 Thus, when brought around the curtain and snapped, the finished side of the leather is showing.  I'm particularly happy with how the Gunmetal snaps ended up looking. 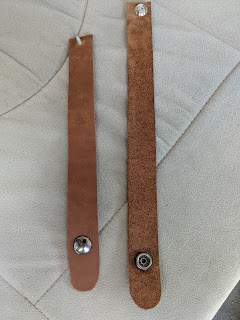 The nice thing about this method is that you can make tie-backs of any length quickly and easily.  Here you can see that the tie-back for the right-rear quarter window is a bit longer than one of the tie-backs for the rear window, as the rear window curtains split in the middle and are thus much shorter. 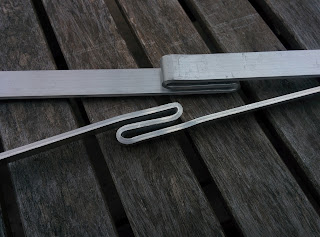 While talking curtains, it's a good time to mention my other little bit of craft from last year.  At one point, all of the curtains were suspended on Recmar 3296 aluminum curtain track, using #3050 Eye Slides.  In some places, the aluminum track was stuck directly to the top of the glass with 3M Dual Lock tape.  On the rear window, I had screwed it to the trim plastic, in order to force it into the necessary curved shape.  Unforunately, in this position, due to this curve, and because the curtain was attached at both top and bottom (to keep the curtain from dangling when the rear door was opened), the eye-slides tended to bind up in the track, making it a pain to open/close the curtains.  Instead, I made my own curtain rod out of 3/4" x 1/8" aluminum bar stock.  The trick was to copy something I'd seen on vintage Westfalia curtain rods: a Z-bend in the middle of the rod.  This allows the two halves of the curtain to overlap each other in the middle, rather than just butting up against each other, which inevitably creates gaps that let the light in!  A tab of Velcro added to the curtain doesn't hurt, either.

Posted by Choose_Adventure at 12:03 PM