After I built a steel-framed VW-style Rock-n-Roll bed last year (Part 1, Part 2), I had big plans to quickly purchase some made-to-order box-cushion covers from one of several online vendors who have leveraged CNC pattern cutting and inexpensive overseas labor.  I was hitting project fatigue on the whole seat/bed thing, so I just wanted to get it over with. 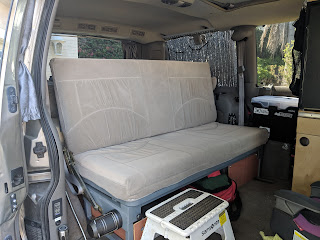 I went so far as to order fabric swatches and start measuring for basic pricing.  The internet-made stuff had me slightly worried for quality, but it was hard to beat the pricing vs. paying to have covers locally made.  At this point in the project, I was over the "Everything I can learn to do myself, I should do myself" ethos, but the cost was hard to ignore.  It turns out, project fatigue hit harder than I'd anticipated, and I didn't even want to think about the bed for several more months.  It wasn't until recent trips, when the deficiencies of the existing "upholstery" were becoming a problem, that I resolved to finally finish these things. 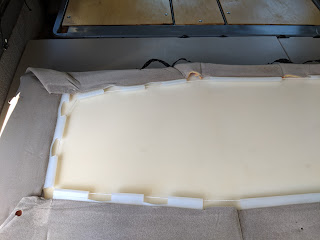 For our first trip out, literally the week after finishing the bed, I just stripped the covers from the old conversion van seat and sort of wrapped them around the new Ikea mattress-foam cushions.  You can see from the photo that the original covers had plastic clips which clamped onto 1/4" steel wire run around the perimeter of the underside.  I secured mine with a loop of string, which worked better than you'd think.  Maybe that's why this solution lasted for almost a year.  The problem that finally forced me to get this project done was that the cushions slide too easily (because of the plastic clips), so the end cushion always ended up sliding off the bed in the middle of the night.

OK, so it's time to finish the project, but which way to go?  Do I order $220 worth of slip covers from an internet retailer and hope that my measurements are good and that the fabric is a semi-decent match?  Do I spend $100-150 on fabric and pay a seamstress another $300+ to sew up the covers for me?

What finally put me over the edge was the damned headrests.  I had harvested the headrest hardware and rests themselves from the conversion van seat, so they already matched the existing covers. They're a complicated shape, and I didn't think anybody short of an actual automotive upholsterer would be willing to tackle making matching covers.    So there it was, once again it was time to attack a problem that was at least a little bit beyond my current skills... 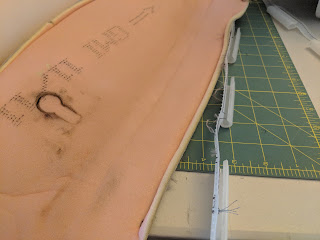 I started with cutting off all the plastic clip-strips, and had to figure out how to work around a couple of "flaws" in the fabric.  The original seat back had holes for the arm-rests on the side for example. 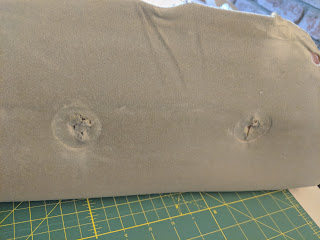 There were also four big holes for the head-rests.  Fortunately the dimensions worked out such that I was just able to work around these areas. 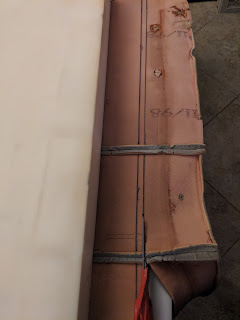 With the general layout figured out, then it was a matter of getting everything squared up and marked for cutting and seam allowances.  Marking the foam-backing of the microfiber was troublesome, I ended up having to use a sharpie! 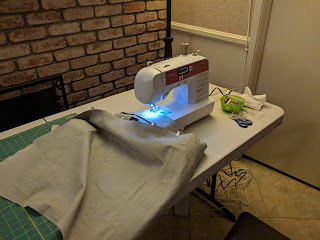 Since the original covers only wrapped around the top and sides of the seats, and these were going to be full covers, I chose a complimentary duck canvas to use for the bottoms of the covers.  These were measured and prepared first, since they got some extra details. 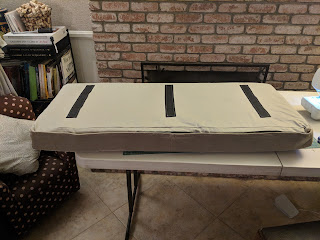 Each cushion backside got three long strips of 2" off-brand Hook & Loop fastener sewed in.  These mate to matching strips of industrial strength self-adhesive Velcro added to the seat segments to keep the cushions in place and to prevent the whole "sliding around" thing.  Velcro was also used along the "hidden" edge as a closure since sewing in zippers is not a skill I wanted to challenge myself to learn just yet.  A note on Velcro vs. generic Hook & Loop - whenever I'm using adhesive-backed fastener, I really prefer to use name-brand "Industrial Strength" or "For Autos" Velcro as they have a much higher temperature rating for the adhesive.  With a van baking in the sun, cheap hook & loop will literally come unglued.  In contrast, I've pulled the top lamination off of a sheet of plywood trying to relocate the Velcro stuff.

I will also take a moment to note that there were a couple of reasons I wanted covers like this, instead of just stretching fabric over the seat segments and stapling from the back (which would have been a quick 1-day project): 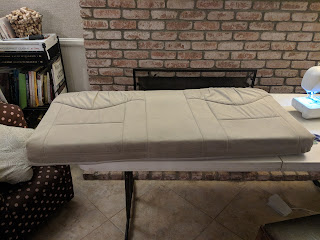 With the backs prepared, it was just a matter of sewing up the rest of the seams.  This foam-backed microfiber gave me all sorts of trouble.  Besides being thick, it was also very "grabby" at the needle - I ended up breaking two needles on this project before I finally figured out how to stitch this stuff.  A denim needle, of all things, ended up working pretty well. 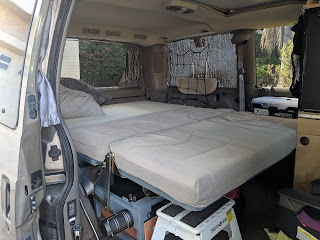 After four nights of post-kiddo-bedtime evenings (I get a lot done when the Mrs is out of town), I had the bench seat back and bottom covers sewn up.  That gets the moving seat surfaces tidied up. 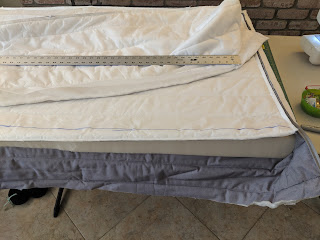 The last bit of the project was to also trim up the zip-on cover from the original Ikea Lycksele Lövås futon to fit just the shorter rear section of the mattress cushion.  I turned it inside out, inserted the shorter foam cushion up to one end, and marked it for cutting.  This cover was thick - the main outer fabric, a layer of batting, and an inner quilted liner.  That said, even sewing through six layers of fabric at the corners was easier than sewing the damned foam-backed microfiber of the original seat fabric. 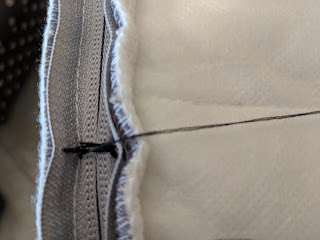 I may not be ready to install a zipper from scratch, but I did know that I had to shorten the zipper chain on both ends after I trimmed everything down.  The remaining two corners were sewn, and the project was done. 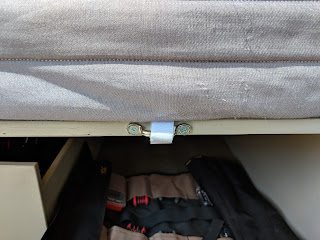 As one last little touch, I decided to take advantage of the velcro loops on the end of the original futon cover (for attaching to a frame) and added a few footman loops at the aft end of the bed.  This keeps the cover from sliding forward. (No velcro strips on this rearmost piece.)
Posted by Choose_Adventure at 8:10 PM