A while back, I'd gone through the effort of fabbing up some brackets so I could sling a Viair 2.5 gallon tank under the slider-door sill area.

However, not long after that project, I realized how heavy my rig had gotten, so I started questioning all my life choices.  Eventually, I bagged that project and embarked on a more holistic pursuit of putting the van on a diet.  I have, however, followed through on mounting a compressor.  My justification is that I'd be carrying a portable compressor anyway, so this was a worthwhile trade-off for a supreme convenience.
I have been using a Viair 400p since our first American Adventurist Desert Rendezvous in 2012, and found it to be more than adequate for my ~30" tires.  A few years ago, I scored a good deal on a used 400c (the fixed-mount version) at another American Adventurist gear swap, and I figured a one-to-one exchange would work out well.

The project to clean-up to the Water-system in September 2020 unlocked easier access to the little cubby in the right-rear corner where the factory scissor jack originally stowed, and I wanted to use that space to mount the compressor.  It's out of the dust and moisture, but also out of the way, and if I leave the factory jack cover off, there's more than enough ventilation.

Popping out the little "oddments tray" at the top of the trim panel also gives easy access to the area from above, making it relatively easy to service things, once I'd rerouted the factory wire harness that normally clips to the outside panel:

As I said, ventilation in that area is pretty good, but I saw that Viair offers a mounting kit that includes a pancake fan to help keep the motor cool. I thought that was a good enough idea to adapt (steal) for myself, so I added a surplus 12v PC fan and a little aluminum bracket:

Next I needed a little control and mounting panel for my air chuck:

The panel mounts to the edge of my cabinet along that cubby and makes it quick and easy to connect the air line and turn on the system. 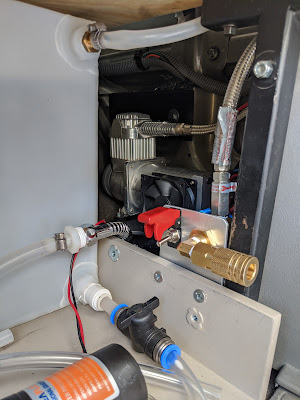 The fan and relay coil are powered by an unused factory accessory wire in that corner.  The wire was in the harness, but disconnected at both ends. I believe this was originally intended as a 20A supply to the trailer wiring harness on some option codes. Once added to the Accessory terminal block in the driver's footwell, I had a nice separately-fused keyed wire right where I needed it.
That wire was convenient for signal, but despite the 20A rating in the factory wiring diagram, it looked a little thin to power the compressor.  I ran a separate power cable for the relay to the compressor directly from my accessory fuse block.
Losing the planned reserve tank does have a few small negatives - foremost in my mind is that without a big volume of air, it will be significantly harder to re-seat the bead of a tire, should that be needed in the field.  Tire fills, in general, may take a bit longer, too.  However, running this system tankless does offer a plus, as well: this great idea for a DIY automatic inflation system, which I've shamelessly stolen.
I'm using a relatively low pressure switch (70on-100off) and the same inline regulator, set to the desired tire pressure.  I can just clip it on to the tire and let it run.  When the tire hits the target pressure, the backpressure from the regulator lets the air line get to 100psi and the compressor shuts off.  Move to the next tire, and repeat.

I am THRILLED with how much faster it is to air up at the end of the trail.  Previously, about half the time spent on airing-up was to unlock the rear cargo box, unpack the portable compressor from the bag, pop the hood and connect the power clips to the battery, etc. etc. etc.  Now I can just open the rear doors, plug in the air hose, flip the switch, and I'm filling.  The auto-shut-off also means I can spend that fill time walking around and looking for problems, instead of watching the gauge.

Posted by Choose_Adventure at 8:55 AM